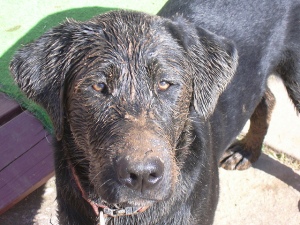 Today would have been my 26th-year wedding anniversary.  It’s so sad.  I was expecting another 26 years.  But honestly, the day passed uneventfully, without as much heartache as I anticipated. There was no mad rush at 1:00 in the afternoon to get to the grocery store for the same tired blue hydrangea that he had given me for the last five years.  My husband had stopped putting any thought into what made me happy within a year of coming home from Iraq.  Maybe it wasn’t his fault. Maybe it was.  I don’t know.  At the end, he was completely detached from me.  He sat up all night loading thousands and thousands of rounds of ammunition.  He fixated on his guns.  He hid money from me so that he could buy more gunpowder, lead and parts.  We stopped sleeping together.  Unless I loaded him into the car for a drive, we stopped doing things together.

One of the reasons that I married my husband was his love of animals.  I had never seen a man so good with them.  He had the patience of Job.   We took in rescue animals.  We participated in wildlife rehabilitation.  We fed strays.  While he was in Iraq, I sent him the boxes and boxes of dog biscuits that he requested.  Army personnel were supposed to shoot feral dogs on sight.  He couldn’t do that.  He fed them and felt better knowing that for at least one day, a dogs belly was full.

When he came back he told me of seeing a dog with a human foot in his mouth.  I’m sure there were other stories about dogs, but he didn’t share them with me.

On Valentine’s Day, the first year he was back, my husband bought me a tiny little labrador retriever puppy.  She had 9 identical brothers and sisters and I don’t know why he chose her, but she came home with us that day.

He named her ‘Velvet’ which I thought was a little trite, but I didn’t mind too much.  I played with her name and she became ‘Velveeta’, which turned into ‘Velveeta, my little squeeze cheese’.  As time went by the name was shortened to ‘Vita’ which means life and was so appropriate for the little jet-black girl dog with the bright, eager eyes.

Almost immediately, my husband began to ignore her.  I took care of all the training.  I stayed up with her, housebroke her, baked her training treats,  brushed her, took her to the vet.

And it wasn’t just ‘Vita’ that he ignored.  He didn’t pay any attention to his horses.  They would break down a fence and be gone for 10 hours before the neighbors would be at the front gate wondering if we knew that the horses were loose.    He had brought another dog home, a vicious dog that bit people, yet he wouldn’t check the fences to make sure that the dog stayed in the yard.

It was at this point that I really started wondering WTF is going on here?  I really didn’t know what TBI meant yet.  It was the beginning of my feeling of betrayal.  I know, you’re thinking ‘betrayal’ isn’t the right word.  But to me it is.  No matter what I said about things going wrong, my husband always shrugged it off.  He refused to think that perhaps he needed help, even after I told him that our marriage was in jeopardy because of his behavior.  He just assumed that he would continue acting the way he did and that I would deal with it.  To me, that was a betrayal.

After he was arrested, I found one of the kittens, locked in the basement, weak from hunger and thirst.   The dogs and horses hadn’t been watered in days.  There was a huge pile of dog vomit on the living room floor that he had left there.

In the end, he’s gone now.  I have the animals.  He hasn’t inquired even once how any of them are.  He hasn’t helped with their expenses, hasn’t worried if they’re being fed.  They missed him at first.  Especially Wally, the guard dog.  Wally feels as if he is on duty all the time now.

But back to my precious Vita.  She’s perfectly trained as a service dog.  She accompanies me on my hikes and sleeps in my bed.  She’s not aggressive in any way.  In fact, if the other dogs are barking, Vita just wanders off to the back and goes to sleep.  ‘Trouble?  That’s not my problem.’ says little Vita.  She’s not a coward, but she figures that she can let someone else take care of any problems.  Call her when the goodies make an appearance.

She’s a ball dog and a stick dog, a hiking dog and a cuddling dog.

She’s my partner on this journey to heal myself.